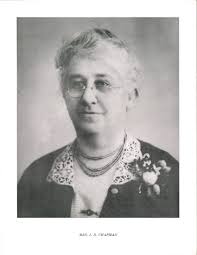 In 1902, Janie Weston Chapman was elected the first president of Woman's Missionary Union, Auxiliary to South Carolina Baptist Convention. She was the wife of a prominent upstate pastor, J.D. Chapman. In 1937, WMU's state missions offering was named "The Mrs. J.D. Chapman Offering for State Interests" to honor Mrs. Chapman's strong missions leadership. In 1985, the name was changed to the "Janie Chapman Offering."

Mission March "Offering Collection" - September 21st
Our Goal: $1,000
Envelopes are in the pews.

February 24, 2022
Homeland Park Baptist Church Welcomes Joseph Habedank In Concert Saturday, March 19th, 2022 @ 6:00pm Doors Open @ 5:00pm A love offering will be taken to insure our church can continue to host events like this in the future and support Joseph’s ministry. ----------------------- Joseph Habedank is a two-time GRAMMY® nominated, Dove Award winning Southern Gospel Artist of the Year (2020) and has been named Gospel Music’s Favorite Soloist for four consecutive years (2017-2020). Joseph has a unique and equally powerful testimony that has been featured on FoxNews.com's Spirited Debate, TBN’s Praise the Lord, and in such publications as Billboard Magazine, CCM Magazine, and Glenn Beck’s The Blaze. He has shared his songs in some of America's greatest churches and venues, including the Brooklyn Tabernacle, Charles Stanley’s First Baptist Atlanta, The Grand Ole Opry, and the historic Ryman Auditorium. On the heels of his critically-acclaimed debut solo release, Welcome Home, he was awa
Read more